‘Creative’ Alsop designs may be used for Titan prisons 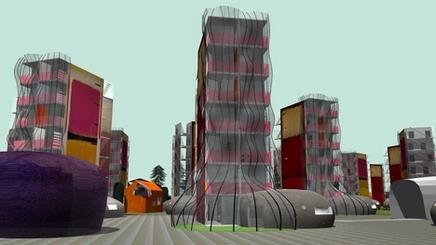 Will Alsop’s designs for vertical “creative prisons” could be used as a blueprint for the government’s Titan facilities, it has emerged.

The Stirling prize-winning architect has been working with Capita Architecture and Wates on preliminary designs for the giant prisons, each of which will hold 2,500 prisoners.

Alsop is better known for his controversial masterplans and pronouncements on bringing creativity and joy into design, than for utilitarian public buildings.

Lord Carter, who was commissioned by the government to review the penal system, recommended last December that three large-scale facilities should be built to hold the UK’s rising prison population.

The Wates/Capita team was appointed to put together concept designs for the prisons for the pre-consultation period. Since then, Alsop has been working with the team to flesh out design ideas for the Titans.

Rob Firth, director of Capita Architecture, said: “Alsop brought a different flavour to the plan. There are some off-the-wall ideas, but combined with our knowledge of the sector it gave us some interesting concepts.”

Alsop’s concepts for tower-like jails were conceived in 2006, after discussions with prisoners at HMP Gartree in Leicestershire.

In the prisons, category C inmates – those who had earned special privileges and trust – would be housed in less punitive surroundings. They would be free to move around their block, lock their cells when they wished, and use communal facilities such as swimming pools.

Alsop said at the time: “I’ve had a positive response from inmates and guards. Other experts in prisons have been interested. The harshest response has come from other architects. I was shocked by that.”

He was unable to comment on the latest developments.

A consultation was launched into the Titan prisons at the beginning of June.

Exciting prospect? Big mistake? Have your say at www.building.co.uk/whatyouthink