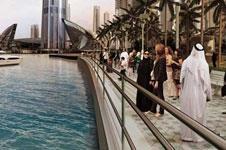 An Indian man has been fined by a Dubai court for cross-dressing and wearing mascara in public.

The man, who works for a property developer in the emirate, was hit with the $2,722 fine after being arrested by a plain-clothes policeman in the Mall of the Emirates, a giant shopping centre that also houses indoor ski centre Ski Dubai.

The police said he was wearing a “glittering” outfit, along with bra, mascara, perfume and a wig.

The defendant claimed he was cross-dressing as part of his preparation for a part in an upcoming Bollywood movie.