Crossrail has finished laying the permanent track for the Elizabeth line in what is the latest major milestone for the £14.8bn project.

This was marked at a ceremony 35m below ground in the eastbound tunnel of the new Whitechapel station attended by a number of people including transport secretary Chris Grayling along with Crossrail’s chairman Terry Morgan and its chief executive Andrew Wolstenholme.

The completion of the track work means construction trains are now able to tavel the full length of both new central London tunnels with the tunnels starting at Royal Oak in the west and finishing at Abbey Wood in the east. 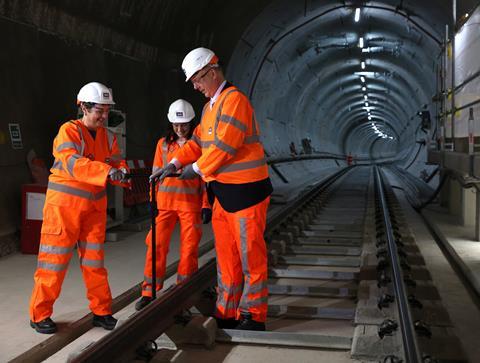 The Transport for London-run railway will span 60 miles and stop at 40 stations. It will be named the Elizabeth line when services through central London open in December 2018.

The next phase of the project will see Crossrail focus on the installation of platform screen doors, signalling, tunnel ventilation and communications systems along the overhead lines that will power the new trains.

These latest developments come just over a month after information released by Crossrail revealed costs on two thirds of the main construction contracts for it have surged by close to £1bn.