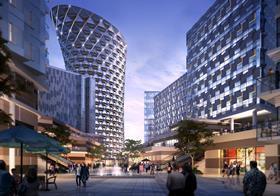 Engineer Cundall has reported a 17% jump in pre-tax profit as its performance in the UK and across most of its international markets improved.

In accounts filed at Companies House for the year to 30 June 2014 the firm reported a pre-tax profit of £5.3m up from £4.5m the previous year.

The firm, which is part of a Broadway Malyan-led team designing a new business district in Chengdu in China (pictured), said the market for engineering services in the year to 30 June 2014 had “improved notably” for the majority of its businesses.

However, turnover from the firm’s second largest market, Australasia and the Far East fell slightly to £4.87m from £4.89m.

The firm also did work in the Americas, which it did not do last year, that accounted for £6,792 of revenue.

However, the firm has since passed 500 staff in November this year. In the same month the firm appointed Parsons Brinckerhoff director Craig Winter as its building services partner, the latest in a series of partner appointments that also included Neil Dely and Belinda Morgan from engineers Buro Happold and RPS Group respectively.

Cundall also reported an improvement in the health of its balance sheet with a rise in the net assets attributable to member to £7.4m up from £5.3m.