All London staff, including former Sweett employees, will work from new office 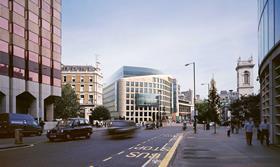 More than 12 months after its £29m takeover of Sweett Group, Currie & Brown has announced it will be opening a new central London office.

All of the company’s London-based employees, including former Sweett staff, will be working out of the one building, which is one of 20 integrated offices the company uses.

Currie & Brown bought Sweett in September 2016 after beating WSP Parsons Brinckerhoff’s takeover offer of £24m made in May last year.

The shift will see 250 employees move into the new offices at 40 Holborn Viaduct, London. The Rolfe Judd Architects-designed building opened back in 2008 and was built by Balfour Beatty.

Alan Manuel, chief operating officer for UK and Europe, said: “We are delighted to be consolidating one of our principal offices into modern, central accommodation.”