Plans to create a boutique hotel backed by Hollywood legend Robert De Niro in Covent Garden have been approved by Westminster City Council.

The proposals, which would also provide new office, retail and restaurant space and a private members club, will see the redevelopment of all but the facades of non-listed buildings in Tavistock Street, Wellington Street, Burleigh Street, and Exeter Street, and the creation of a new courtyard-conservatory area. Capco said it intended to retain one non-listed building in its entirety.

The height of some of the buildings will be increased with mansard roofs and – in the case of Wellington House - a roof garden. The tallest element of the scheme is set to be eight storeys.

De Niro has previously said the scheme would “honour the heritage of the area”, bringing the spirit of his previous development – New York’s Greenwich Hotel - to Covent Garden.

Documents submitted with the application showed Heyne Tillett Steel as structural engineer for the project and Gardiner & Theobald as QS.

Cllr Robert Davis, Westminster City Council deputy leader, said: “This is one of the finest schemes we have considered for Covent Garden in years. The design is of the highest quality and it fits the bill as a Covent Garden building that meshes the new with the old. The hotel will attract visitors from all over the world.

“It will be a brand new destination on the ‘mean streets’ of this largely forgotten part of Covent Garden, and so I am sure that taxi drivers across London will soon need to add the Wellington Hotel to their A-Zs.” 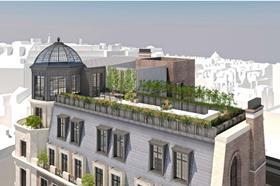