Mortgage approvals fell to the lowest level for almost two years in December, according to figures from the Bank of England

While poor weather can perhaps explain some of the drop in approvals, rising unemployment, inflation and the VAT hike could have also played a part. RICS chief economist Simon Rubinsohn, said: “The disappointing activity data through the latter part of 2010 is broadly consistent with the RICS Housing Market Survey’s negative picture on the number of buyer enquiries.”

Mortgage approvals are a good leading indicator of future activity in the housing sector, as they show the confidence of the house buying public. Approvals have been languishing below the 50,000 level for some time and an increase in activity looks unlikely in the near future. According to Rubinsohn “Some rebound in the January numbers is likely if only because of the better weather conditions. However, with lending still constrained, and mortgage rates edging up under pressure from developments in financial markets, it is hard to see mortgage approvals picking up markedly.”

The Bank of England’s interest rate setting committee is currently split in its assessment of the market. With inflation above the Bank’s official 2% target, action on interest rates could come sooner rather than later despite weak economic growth. 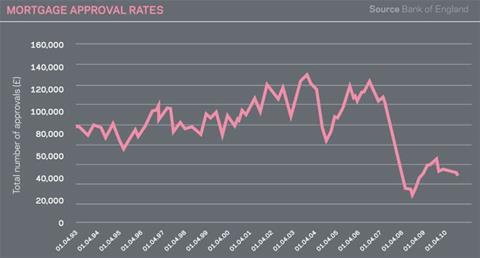