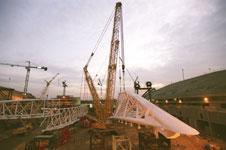 The fall in construction purchasing sped up in October, according to the latest figures from the CIPS/Markit purchasing managers index, signalling the construction industry remains firmly in recession.

The index fell to 46.2 last month, down from 46.7 in September. The index is based on a survey of purchasing managers asked whether orders had increased or decreased in the month, with any figure below 50 representing a decline in orders. A decline in activity has now been recorded in each of the past 20 months.

Residential construction grew for the second month in a row, giving some cause for comfort. But the improvement was not mirrored in the commercial or civil engineering sectors, where further contractions were seen. The decline in civil engineering activity was the fastest recorded in seven months. Jobs were also cut at their sharpest rate in four months in October.

David Noble, CIPS’ chief executive, said: “The fact that the sector took another turn for the worse this month just highlights how fragile it still is. Further drops in commercial and civil engineering activity were the key drivers behind the bad news. A stabilisation in order books did little to support activity, while weak sterling and higher fuel prices added to constructors' difficulties.

“Perhaps of most concern is the continued slashing of jobs at construction firms. The pace of job cuts actually accelerated in October as the current state of the sector means that many who have lost jobs will struggle to find something else before Christmas.”