Work to start this summer 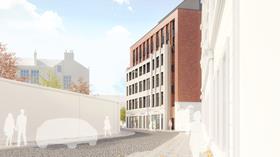 Glasgow developer Structured House Group has been given planning for a £20m project to build two hotels on the site of a former furniture warehouse in Dundee.

The B-listed Wilson House on Barrack Street will be demolished and replaced with two separate hotels and a restaurant under the developer’s Boho brand.

The developer has agreed to retain the 1930s art deco façade of the former Robertson’s House Furnishers warehouse which will be converted into a 115-room, three-star hotel overlooking a 16th century burial ground with a 300m sq ground floor restaurant.

A newly-built, 110-room, four-star hotel will be built in neighbouring Willison Street to meet a growing demand for hotel rooms in the city which is set to benefit from an influx of visitors once Kengo Kuma’s V&A Dundee, being built by Bam, opens this September.

Work on the project is due to start in July with a completion date set for October 2019.

Contractors for the work have yet to be appointed.