Transport for London (TfL) has put developers on notice for a £670m deal to build a major mixed-use scheme in west London.

The job will comprise two phases to be built alongside the tracks of the District and Piccadilly tube lines in Acton and will include around 1,700 homes, over 2,000sq m of commercial space and 500sq m of retail space.

In a Prior Information Notice, TfL said it was gauging opinion from interested firms before launching the procurement process, which will see the winning firm form a JV with TfL to develop the site.

The first phase is for a block up to 25 storeys on Bollo Lane comprising 195 homes and 520sq m of commercial space, with an outline planning application for a further 657 homes across eight more blocks of between eight and 18 storeys.

Designed by HOK, this phase, which has a development value of £350m, would also include a new accommodation building for train crew, along with public realm. 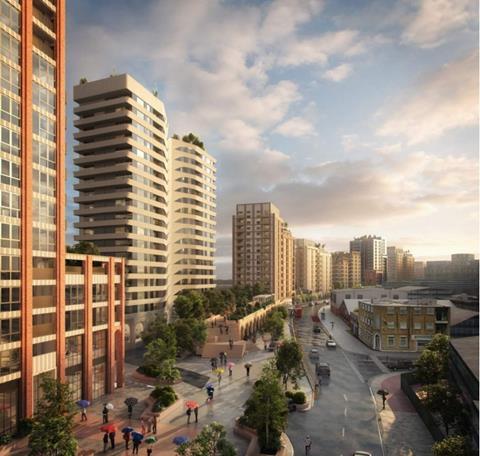 How the first phase of the scheme will look when built

The second phase is an 800-home scheme currently in pre-application which will be built just north of Acton Town tube station on land which forms part of Ealing Common Depot, a rail depot for the London Underground built in 1905.

TfL said that the JV would start by building the Bollo Lane scheme first. A contract notice for both schemes is expected to be published on 1 October.

This part of Acton has seen a number of new developments get the green light over the past decade, including BUJ Architects’ 54-storey One West Point tower and KPF architects’ 55-storey twin towers scheme at Portal Way.

Neighbouring HOK’s scheme for TfL is the 52 acre Acton Gardens, another huge project worth £800m in total which will see 3,500 homes built when finished.

Stitch, the latest architect to win work on Acton Gardens, got the go ahead last month for a scheme which will see a series of 1950s tower blocks and  the South Acton Working Men’s Club demolished to make way for 336 new homes.