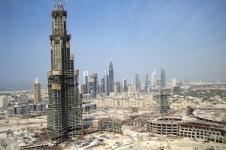 Report shows continued decline in second quarter of 2009, although there are signs market is stabilising

Dubai’s residential property prices fell an average of 24% in the second quarter of 2009, a report from Jones Lang LaSalle has found. The rate of price decline is falling, however, meaning the market is beginning to stabilise, albeit at lower levels than a year ago, before Dubai was struck by the downturn.

There has also been a drop in rents, although at lower rate than before. The average rent for two-bedroom apartments fell 15% in the second quarter, compared with a 22% decline in the first quarter of the year, according to the report, Jones Lang LaSalle MENA's Q2 2009 Dubai Residential Market Snapshot Dubai.

New residential supply continues, with 22,400 residential units expected to be handed over in 2009, in spite of more than $24bn worth of residential projects being put on hold or cancelled.

Craig Plumb, head of research at Jones Lang LaSalle MENA, said: “The narrowing gap between asking prices and achieved prices is a shows the market is beginning to stabilise, albeit at significantly lower levels than those seen earlier in the year.”