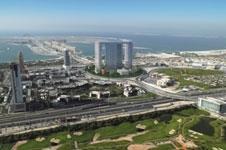 80% of money owed to Arabtec is from government-linked entities

The UAE’s largest contractor Arabtec is owed about 3 billion dirhams (£542m) by the country’s developers. The firm’s chief executive Riad Kamal said 80% of the money was owed by government-linked entities. He said that Arabtec was hoping to meet government officials later this week to discuss the situation.

Kamal told Reuters he was confident Arabtec would be paid “eventually”. “We feel quite secure the money is going to come eventually. It’s a question of if it’s going to come in good time to be able to sustain the outlook and commitments that we have with our suppliers and sub-contractors,” Mr Kamal said.

But in the meantime Arabtec is aiming to build up business outside the UAE. It has begun working in Saudi Arabia and is also looking at Libya and Algeria. In Saudi the firm recently started work on its first project, a 1.5 billion riyals (£266m) university in Riyadh. It has two further potential contracts in the kingdom.

Building reported in March that the average contractor was owed at least £50m in Dubai. Both UK contractors and consultants in the region have reported problems getting paid since November 2008 when the global recession started to take hold in the UAE.