Carillion’s £306.5m acquisition of Eaga will add more than £700m in sales to its fast growing support services division, as it continues its move away from general contracting in the UK.

In its most recent financial years, the combined group would have had sales of £6.2bn and operating profits of £259.7m.

Carillion had a £2.5bn slice of the £24.1bn support services market in 2008, according to its own figures. It had been ahead of second placed Capita, with £2.4bn in sales, but adding the Eaga business - the aquisition of which it announced last Friday - puts it further ahead.

Eaga’s share price fell from 108.25p on the day before the spending review in October, when cuts to the Warm Front scheme were announced, to 51.25p in December. However, Carillion says it is exposed to a market worth up to £20bn a year.

Philip Rogerson, chairman of Carillion, said: “Carillion has identified the low-carbon market as a strategic area of growth and the acquisition of Eaga will create a scalable platform to build the UK’s largest independent energy services provider.”

For more than a year, Carillion has been reducing the size of its UK general contracting division as it focuses on growth markets in Canada and the Middle East. It has also applied to be classified as a support services firm by the London Stock Exchange, rather than as a construction firm.

Following the deal, Eaga’s largest shareholder (holding 37% of its shares), the Eaga Partnership Trust, will retain its exposure to the combined group. 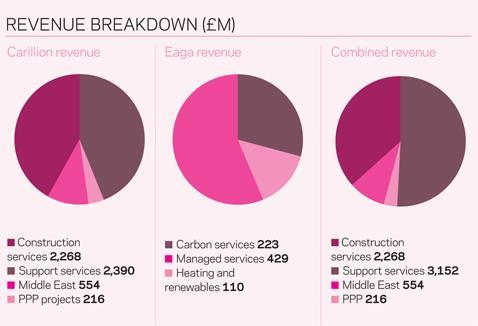