Architect pH+ has received planning permission for a new mixed-use scheme on the Limehouse Cut Canal in Tower Hamlets.

The east London proposal for the redevelopment of the site at Bow Exchange involves demolishing industrial warehouse buildings and replacing them with buildings ranging from four to nine storeys.

The development will include office space at ground and mezzanine levels and 92 residential units above. Developer City & Suburban Homes is the client on the £20m project.

The scheme has been designed around a series of communal tiered gardens to provide residents with green links to the canal and shared spaces. 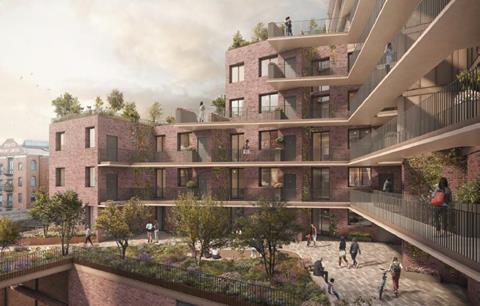 A new pedestrian route and public space is proposed to link Yeo Street and the Limehouse Cut, allowing greater access to the water way for both the new and existing community.

Work is due to start on site in early 2021, completing the following year.