EC Harris to target acquisitions by end of year

Firm plans to scale up ahead of market flotation in 2014

EC Harris will target sizeable acquisitions “by the end of the year” as it aims to scale up ahead of a planned market flotation in 2014, according to chief executive Philip Youell.

The consultant is in discussions with a firm in Germany and another in China, and may acquire a firm in the oil and gas sector, Youell added.

Youell attributed the profit rise to international growth and a restructure of the business last year to reduce costs. He admitted EC Harris needed to acquire firms to reach its target turnover of between £400m and £500m before listing. Last month Building revealed Youell was also open to potentially merging with an equivalent-sized firm, as well as smaller acquisitions.

He said: “Because of market uncertainty, finding suitable acquisitions has been taking longer. I’m hopeful we’ll land these this year. You should see something material by Christmas.”

An acquisition in China would further strengthen the firm’s presence there after its takeover of consultant MBPM in May.

Youell added he expected organic growth to increase turnover by 10% in 2012 and said the order book for the first two months in Asia would underpin a 15% growth there.

Metro signed up EC Harris earlier this year to help it expand its supermarket business around the world. In its statement, EC Harris said it had seen a shift in revenues from property and public to oil, gas, energy and transportation. Its profit included a bonus pool of £3.4m for its employees. 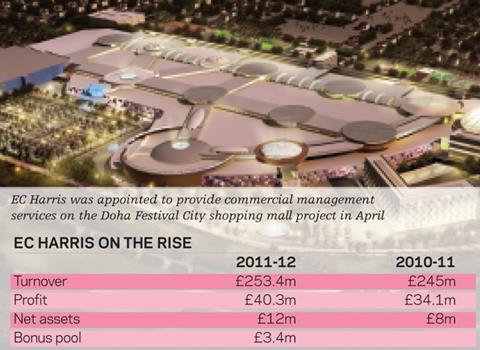