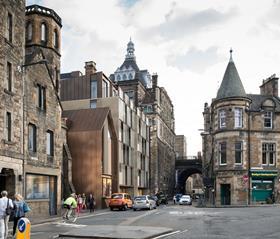 Edinburgh-headquartered firm Thomas & Adamson has been appointed project manager and QS for the first Virgin hotel to be built outside the US.

The global consultant will oversee the development, which has been designed by Glasgow-based architect ICA, and will occupy the India Buildings in Edinburgh’s Cowgate district in the Scottish capital’s Old Town.

Brian Donaldson, a partner at Thomas & Adamson, said the firm’s appointment was a “significant success” for its Scottish operation, which has offices in Edinburgh and Glasgow, adding the hotel sector had continued to develop “despite the widely anticipated challenges of Brexit”.

Speaking about the decision to open the hotel in the Scottish capital Virgin Group founder Richard Branson said the city had played an important part in his life. “It is such an iconic city and we’re thrilled to be able to say it will be the home of the first Virgin Hotel in the UK and across Europe.

“My grandparents were from Edinburgh and my wife Joan is also Scottish, so the country has always held a special place in my heart. The people of Edinburgh have been so great in welcoming us to their great city; we can’t wait to open our doors to people across the country and, indeed, the world.”

The first – and currently only operating – Virgin hotel, part of Richard Branson’s Virgin Group, is in Chicago.

More are set to open across the US, including one in San Francisco this year with further openings in New York and Washington DC next.