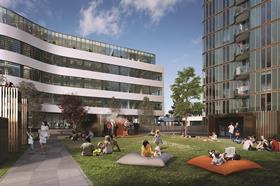 Essential Living has announced it is to end its main contractor framework for its £1bn development pipeline.

The firm is to take a “more hands-on” approach by expanding its in-house construction management capabilities and engaging directly with suppliers and sub-contractors.

Essential Living already has a trade contractor framework in place delivering elements of its projects such as kitchens and bathrooms.

The announcement comes following a period of spiraling construction costs, which has seen the viability of many projects called into question.

Ray Theakston, Essential Living’s construction director, said the decision would allow “greater control” over the management of costs and risk, which the company was “no longer willing to pay” a main contractor for.

He also confirmed the company will increasingly use a range of modern methods of construction. This will remove reliance on labour-intensive on site trades and operations.

Cast director Mark Farmer, which is supporting Essential Living with the implementation of their development programme, said the decision was about “recognizing” the changing dynamics in the construction supply chain.

He added that clients are “questioning” the price lump sum conversion.