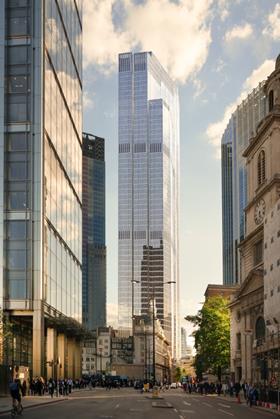 The City of London has given the green light to Lipton Rogers’ replacement scheme for the Pinnacle site - 22 Bishopsgate.

The 62-storey tower is designed by PLP and is set to be constructed by Brookfield Multiplex.

A source close to the project said the construction value is likely to be around £500m - Brookfield Multiplex signed a pre-construction agreement with Lipton Rogers last February and the two parties will work to agree a lump sum for the main works by February 2016, allowing main works to begin on site that month. Completion is scheduled for November 2018.

Building revealed earlier this month that William Hare and Careys have been lined up for the £40-50m steel and £30-40m concrete packages respectively. Keltbray is already on site demolishing the old ‘stump’ of concrete core abandoned by the former Pinnacle scheme and modifying the piling works.

According to the City of London’s planning report on the scheme, it crams in a whopping 2.2 million sq ft of floor space, 1 million sq ft more than the Shard despite it being 30m shorter at 278m tall.

City of London planners said the building’s free-to-visit viewing gallery over the top three floors and public gallery on the ground floor were critical to it being recommended for approval.

Sir Stuart Lipton, co-founder of Lipton Rogers, said: “22 Bishopsgate has been designed to enhance the quality of life of its occupants by adding amenities which make the work experience more enjoyable and effective.”

A City of London planning committee approved the scheme this morning.

In the report the planners said that while it had received objections - including from Royal Parks and the London boroughs of Tower Hamlets and Islington - they nonetheless believed the scheme “accords with the development plan as a whole” and “would preserve the setting of listed buildings”.

The report praised the scheme’s proposed public gallery on the ground floor, as well as the viewing gallery, bars and restaraunts on the top three floors. The report says: “The public realm benefits, most particularly the free public viewing gallery, are critical to the acceptability of this major development.”