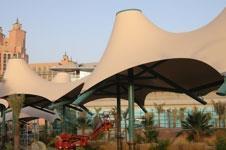 A fire which broke out yesterday in the lobby of the almost-completed Atlantis hotel at the centre of the Palm Jumeirah Development, will not delay its grand opening at the end of the month, a hotel spokesperson said last night.

The fire, which broke out at around 7am left smoke billowing from the central dome of the US $1.5bn hotel at the top of the five-star Palm development. Palm residents said they were woken by the sirens of police and emergency vehicles rushing to the hotel. Witnesses said there was so much smoke that the hotel looked as if the entire building was in flames.

An initial police investigation said welders might have accidentally sparked the blaze.

Brig Abdul Jalil Mahdi, deputy director of Dubai Police’s Criminal Investigation Department for Preventative Security said: “We are investigating the matter and will know more later, but it was only a small fire.”

Kerzner International, which manages the 1,539-room hotel said the site was evacuated and no one was injured.

The fire has raised questions over how well equipped the authorities are to fight another major fire on the man-made island, which is home to thousands of people but does not have its own fire station. Civil Defence firemen who responded to yesterday’s blaze had to drive from several locations on the mainland.

Dubai Civil Defence said its preparations for emergency responses on island developments including the Palm Jumeirah were still in the “study and development phase”.