Firms have until 18 February to send in bids

Contractors have until 18 February to send in bids for the major city-centre scheme, with five candidates expected to be shortlisted.

It will see a pair of buildings built either side of the university’s existing BDP-designed Technology and Innovation (TIC) centre completed by Lendlease in 2015.- 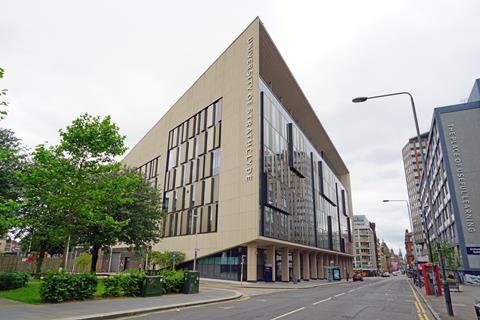 The scheme, which forms part of the university’s plans to create a new innovation district in Scotland’s biggest city, aims to bring together researchers, academics, and entrepreneurs to catalyse a range of industries including energy, space and pharmaceuticals.

The university, which launched a net zero strategy for its estate in 2020, aims for the buildings to be built to Passivhaus standards.

The university is eyeing two options for the smaller building – a £40m new build block or a £30m refurbishment of an existing building to house the new facility.

A contract notice published yesterday contains three lots for contractors covering the potential approaches the university could take. The first £105m lot is for the construction of both blocks as new builds, a second £65m lot would be used to build just TIC East, and a third £30m lot for the refurbishment option for TIC West.

The notice adds that firms must have a turnover of at least £180m over the past three years to bid for the first lot, £120m for the second lot and £40m for the third.

Invitations to tender are expected to be dispatched to shortlisted candidates by 14 March.

The scheme is the latest in a string of new projects launched by the university, including a £65m skills factory next door to Glasgow airport which was awarded to Galliford Try’s Scottish arm in June 2020.

A £60m learning and teaching building was also awarded to Balfour Beatty in a £33m deal in September 2018.