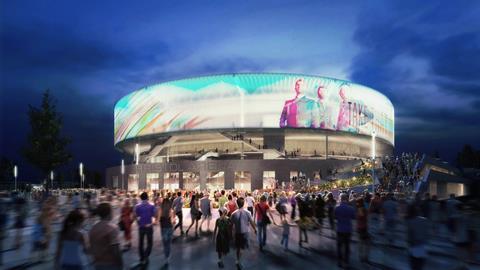 Bam, Bouygues, Sir Robert McAlpine, Laing O’Rourke and Buckingham Group have been shortlisted in the contest to build the £90m Populous-designed Bristol Arena.

Bids will be submitted by 18 December with a decision about the winning contractor expected in February 2016.

Populous and partner Feilden Clegg Bradley won the RIBA competition to design the arena for Bristol in March. The arena’s capacity will be 12,000 and it is expected to open in 2018.

Aecom is cost consultant and employer’s agent on the project.

Bristol mayor George Ferguson said: “This is the next key milestone in the arena programme and takes us one step closer to delivery.

“Bristol has waited over 20 years for an arena which will at long last play a key part in the regeneration of the Temple Quarter Enterprise Zone and will make a vitally important contribution to the local economy.

“For the winning contractor it will be great opportunity to work with us to help shape the face of our increasingly vibrant city.”

The pre-planning consultation process for the arena has closed and two planning applications are due to be submitted soon.

One of the applications is for the arena venue and access and the other is for the future development of housing, business and leisure uses adjacent to the venue.

Bristol Arena will sit in the Bristol Temple Quarter Enterprise Zone which has been masterplanned by Allies & Morrison.