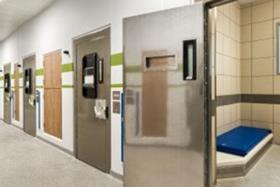 The contractor has teamed up with Canadian architect NORR to launch the product, named CODE, which builds on its Sunesis standardised schools concept, developed with Scape.

Willmott Dixon is offering police forces custody suites in three sizes. Alpha provides up to 28 cells, Bravo up to 36 cells and Charlie more than 36 cells.

The contractor is hoping to capitalise on a nationwide move by police forces to rationalise their estates. Many are opting to stop processing prisoners at small police stations with only a handful of cells in favour of investing millions of pounds in larger, regional custody suites.

Willmott Dixon said the CODE concept had been developed with input from the Home Office and more than 20 police forces.