Work is expected to start next July 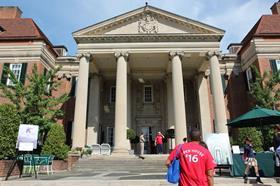 The Foreign and Commonwealth Office has started looking for a contractor for a £55m overhaul of the British Embassy in Washington DC.

The winning contractor will be responsible for the major building repair and refurbishment of three existing buildings at the British Embassy, with the Ambassador’s Residence and both the Old and New Chancery Buildings set for a revamp.

Contractors have until 21 September to express interest in the project with a shortlist of no more than five bidders expected to be invited to tender on 1 January next year.

The site is located at the city’s 3100 Massachusetts Ave NW.