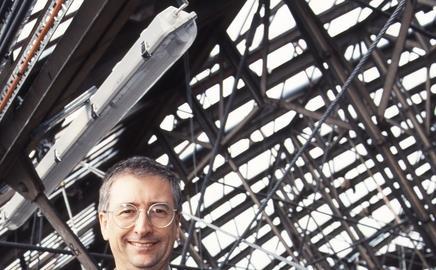 As an architect, Terry headed up BDP's team on such projects as the £100m redevelopment of the Royal Opera House. His leadership on these buildings and others saw him twice voted chairman of the UK's largest firm of architects, a role that he held from 2002 to 2006.

But Terry was also known as a strong advocate of the role of computer technology in modern construction techniques, having served as UK chairman for the International Alliance for Interoperability (IAI) – later known as buildingSMART – and as chairman of the European Enterprise Interoperability Centre (EIC).

Terry originally joined BDP in 1972, working for three years in the firm's Manchester office. After a nine-year break overseas working for US firm Heery International, Terry returned to BDP in 1990 and became a director of the firm in 1995.

His most noted project at BDP was undoubtedly the redevelopment of the Royal Opera House in central London, for which he helped set up a joint venture with Dixon Jones. The RIBA Award-winning project was put together from 10,000 working drawings over a period of 16 years, and reshaped the area of Covent Garden surrounding it.

Almost as radical was the £60m Royal Albert Hall revamp, which saw the Victorian concert auditorium's backstage facilities dragged into the 21st century, while keeping periods of closure to a minimum. Terry oversaw the project on BDP’s side.

Bob Older, project manager for Taylor Woodrow on the Royal Albert Hall redevelopment, said that he was saddened by news of Terry’s death.

He said: “The RAH project was hallmarked by teamwork and communication. I am sure that all who remember Nick’s contribution to the project would agree that these were two of his great qualities. With these skills, a ready smile, an open mind and courage to face and deal with unpleasant facts, Nick helped us all in delivering a result to be proud of.”

The vision and values of the practice are based on the concept of collaboration and integration. The “complete” designer is the group, not the isolated individual

Terry's chairmanship of BDP coincided with the death of Sir George Grenfell Baines, the practice's founder, and the appointment of present chief executive Peter Drummond.

Of Baines, Terry said: “The vision and values of the practice are based on the concept of collaboration and integration. The 'complete' designer is the group, not the isolated individual.”

It was this crystallisation of the firm's ethos that showed Terry's understanding and dedication to the firm at which he spent most of his working career.

But it was the advancement of IT interoperability that Terry made his own personal crusade. The IAI, of which the architect was the UK chairman from 2002 to 2008, represents the international design and construction sector. Under Terry's chairmanship, it brought together some of the world's experts in design technology to ensure building information modelling (BIM) was accurate and standardised.

The growth of BIM in the industry has had much to do with the efforts of buildingSMART and its European equivalent, the EIC, to promote interoperability and work to standardise operating systems and technology.

Terry was an ardent lecturer on building information modelling, and shared his knowledge with many architectural students and professionals.

He had been due to give a presentation on BIM at the RIBA Conference in October last year, but was forced to pull out due to sudden illness – the first evidence of the cancer that was to take his life just over a year later.

Friends and colleagues remember Terry as an amiable, gentle man, and a tireless professional dedicated to his craft. In a 2003 interview, he was asked for his motto and his reply sums up his professional demeanour. It was: “Do not accept second best.”