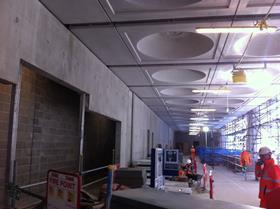 Crossrail has drafted in a firm headed by the former chairman of collapsed cladding contractor Lakesmere to complete work at a string of stations on the £15bn scheme.

In a statement, Crossrail said it had novated work to Kace Holdings for work at Liverpool Street, Whitechapel, Tottenham Court Road and Canary Wharf stations.

According to documents filed at Companies House, Kace was set up in January last year and has only one listed director – Mark Davey.

Davey set up Lakesmere in 1993 having led the first management buyout of the firm. A second MBO at the end of 2015 saw Davey relinquish the chief executive role becoming chairman and international CEO.

Crossrail’s commercial director Paul Grammer said: “Following the entry of Lakesmere Ltd into administration, Crossrail has been working closely with our tier 1 contractors to ensure that works previously subcontracted to Lakesmere on Crossrail are able to be completed.”

Laing O’Rourke is working on the Tottenham Court Road and Liverpool Street schemes while a Balfour Beatty Morgan Sindall Vinci Joint Venture is working on Whitechapel.

The main contractor on the station at Canary Wharf, which has been designed by Foster & Partners, is now Crossrail following handover from Canary Wharf Group.

Crossrail said that the main contractor on a fifth station affected by Lakesmere’s collapse earlier this month – Paddington (pictured) which is being carried out by a Costain Skanska JV – had made its own arrangements to complete the work.

Last week McMullen Facades, a subsidiary of Lakesmere based in Northern Ireland, also went into administration but was snapped up by Hertfordshire contractor JRL 48 hours later.

In its last set of published accounts, Lakesmere reported a £118m turnover and pre-tax profit of £3.5m for the year ending January 2016.