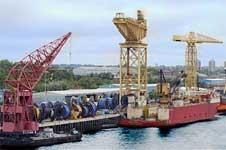 According to a report in today’s Times, over the last three decades Shepherd Offshore has been buying up derelict former shipyard property. It now controls 190 acres along a mile of Tyne riverfront running from the company’s headquarters in the east end of the city to the old Swan Hunter yard.

Shepherd Offshore is already building the £10m taxpayer-subsidised facility that is to house Clipper Windpower, London’s only listed wind turbine manufacturer. It will use the plant to build a 150m diameter turbine that will be capable of producing 10MW of electricity, enough to power a small town.

The Clipper’s first UK-made blades should be produced by October and it is hoped this will be the start of things to come, with the land owned by Shepherd Offshore becoming the base for a renewables cluster.

Shepherd is best known as the co-owner of Newcastle United until 2007, however he is also the third-generation head of the family firm Shepherd Offshore, once a scrap metal merchant and now an engineering services company, which he runs with his younger brother, Bruce.