Fulham gets green light for new stand at Craven Cottage

Populous is the third architect to work on the job 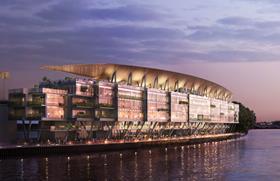 Fulham has been given the go-ahead for its proposed new riverside stand at its Craven Cottage ground.

The Populous-designed project will see the existing Riverside Stand replaced by a new two-tier structure that will expand the capacity of Craven Cottage to almost 30,000. The stand’s capacity will be increased from 4,689 to 8,650.

The promotion-chasing Championship side won planning for a controversial KSS-designed Riverside Stand in July 2013 but this was never built and Thomas Heatherwick was then hired by the club’s new owner Shahid Khan in the spring of 2016.

But last autumn Heatherwick was replaced by Populous, which is also working with Khan on the home of his American Football team, the Jacksonville Jaguars.

The club declined to comment on why Heatherwick was ditched.

Buckingham Group, which completed work on the £50m MK Dons stadium back in 2008 and began work building Brighton & Hove Albion’s new ground the same year, had been lined up as main contractor on the KSS scheme, which had a value of £15m, but the job is being retendered under the new design.

The new stand will include facilities for both match day and non-match day use.

A riverside walkway will also be created to complete the riverside path along the Thames from Putney to Hammersmith.

Work is expected to begin in early 2019.