A 20-storey residential tower in Fulham, south-west London, designed by Henley Halebrown has been recommended for approval.

The scheme for HFS Developments, a partnership between developer Stanhope and Hammersmith and Fulham council, will now go to the GLA for final sign-off after being cleared by planning officers recently. 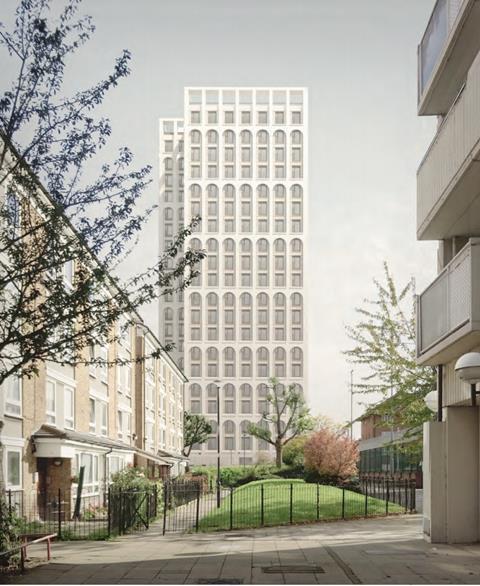 Located on Fulham’s Clem Attlee Estate, the site was formerly home to a 68-home 1960s tower block which had been vacant for seven years prior to its demolition in 2018 because of asbestos.

The new tower’s facade is composed of three-storey high concrete arches designed to conceal the height of the building, which is 20m higher than the previous block despite being just two storeys higher – a result of a planning guidance requiring the height of each home to be increased by 0.5m.

Originally recommended for approval in 2017, the scheme was sent back to the drawing board by the High Court last year following a judicial review brought by a local resident.

Henley Halebrown’s recent projects include a mixed-use scheme in Hackney, east London consisting of 68 homes and a 350-place primary school.