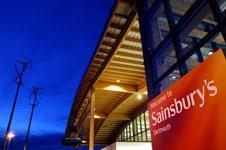 Food retailer on track for 15% expansion despite sales slowdown

Sainsbury's has insisted that the group is still on track to achieve it's ambitious 15% expansion plan by 2011 despite a slowdown in market growth.

Sales at Sainsbury's have slowed in the downturn and the group is warning this could continue in the coming months in results posted to October 2009.

Like-for-like sales, which do not take new store openings into account, for the 16 weeks to 3 October rose 4.6% excluding fuel, despite a "challenging environment". In the previous quarter, sales grew by 7%.

The group's major rival Tesco which yesterday said its second quarter like-for-like sales in the UK had risen by 2.1%.

Chief executive Justin King said: " Our performance in the first half continues to show good progress as we also invest for the future. While we expect market growth to slow in the coming months due to reduced inflation, the universal appeal of our focus on quality and value leaves us well positioned going forward."