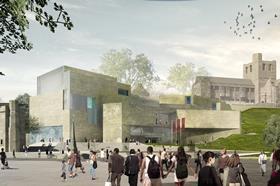 Miller’s problem theatre job at Bangor University has suffered a further blow after the university decided to cancel the opening show, which had already been put back five months.

In September, the university announced the opening production in the Theatr Bryn Terfel had been pushed back from late September to the New Year because the building wouldn’t be ready.

The theatre, which should have completed in August, is the first phase of a wider Pontio cultural centre at Bangor University being built by Miller.

Speaking to Building last month Ken Gillespie, construction chief executive at Galliford Try, which now owns Miller Construction, said the project team was “targeting completion by the end of November 2014” for all phases of the project.

But yesterday the university announced that it had cancelled the opening show, which it said it had pencilled in for February, and that it was still working with Miller to agree a revised timetable for completion.

He said: “Following detailed discussions with the contractor, and with [production company] Theatr Genedlaethol Cymru, it has become clear that work on the building project is unlikely to be completed in time for us to reschedule Chwalfa in February as originally hoped.

“We are now going through a detailed process of review with the contractor, Miller, to establish a revised timetable for opening.”

Theatr Genedlaethol Cymru’s artistic director Arwel Gruffydd said it was “disappointing” that the show had to be cancelled.

“This comes after months of preparatory work, and many of us – artists, professional theatre workers as well as members of the local community – have worked tirelessly and given so much to create this exceptional production.

“We, and Pontio, will be seeking every possible opportunity to stage this work in the future. Unfortunately it was not possible for us to have assurances that Theatr Bryn Terfel would be ready for us to do so in the New Year. We will therefore continue with plans to stage another production elsewhere in the New Year.”

A Galliford Try spokesperson said: “Due to unforeseen circumstances in the construction process, the Pontio building remains yet to have been completed.

“We sympathise with all those who have been affected by the delay, and we continue to work hard with Bangor University to complete construction within the quickest possible timescale.”