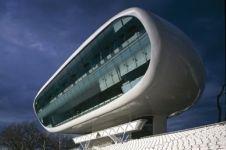 The architect, who founded the practice in 1979, was behind such iconic buildings as the Selfridges building in Birmingham and the Lords Media Centre.

Kaplicky came to the UK from Czechoslovakia in 1968 and worked originally for the offices of Denys Lasdun. He joined the studio of Richard Rogers and Renzo Piano in 1973, working with them on the designs for the Pompidou Centre.

After a stint with Rogers, he joined Norman Foster’s practice, then called Foster Associates. While with Foster, he set up Future Systems but it was to be some years before the practice gained repute.

Amanda Levete, his first wife, became a partner in 1989 and under the couple’s leadership the practice became a success, winning the Stirling Prize for the Lords Media Centre in 1999 and the commission to design the Czech National Library in 2007.

Media reports last year claimed that Kaplicky and Levete had decided to split up the practice, with Kaplicky retaining the Future Systems name to work in Prague and Levete carrying on the London studio’s work under her own name. The couple had ended their personal relationship some years previously.

Kaplicky collapsed suddenly yesterday while walking in Prague, and could not be resuscitated. His wife had just that afternoon given birth to his daughter.