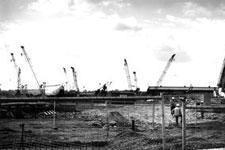 Galliford Try and Renew Holdings have revealed they will appeal against their OFT fines as a result of the cover pricing probe in September.

Galliford Try was fined £8.3m while Renew was fined £3.5m in relation to its Bullock and Allenbuild subsidiaries.

Other major contractors fined by the OFT such as Balfour Beatty and Interserve and Willmott Dixon said they would not be appealing.

It is understood that the tribunal has the power to reduce or increase fines once an appeal is heard. But one legal source described an increase in the fines as “highly unlikely”, given the already weak state of the industry.

The tribunal is expecting around 15 to 20 firms from the 103 fined to launch an appeal, according to legal experts. The deadline was 5pm on Monday.

The next stage will be case management conferences, which will begin in January or February next year. All sides discuss the key issues and similar cases may be lumped together to save time.

Written statements will be followed by the hearing and the whole process could take eight months. Lawyers say the key issue will be one of equal treatment. “It will be quite boring and technical to the outside world,” said one lawyer last week.

See here for the full conclusions by the OFT.