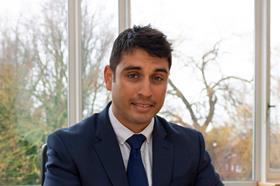 Kieran Daya (pictured) joins the executive board at the contractor’s regeneration arm following his appointment as land and development director.

Daya, who will be responsible for acquiring new land, was previously land director at David Wilson Homes and before that at Redrow.

The move follows the appointment of a new projects director at the firm.

But now she will work on overseeing major projects and increasing workload for the business across the UK.

Galliford Try is due to unveil its interim results tomorrow (13 February).