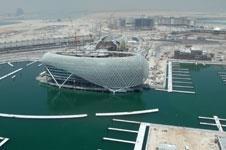 If you’re reading this in the UAE, prepare to chuck out your chinz because the biggest Ikea store in the Middle East and North Africa region is on its way. UAE developers Aldar Properties and Al-Futtaim Group have signed an agreement to build a giant Ikea on Yas Island in Abu Dhabi.

The new store will be part of the island’s Super Regional Mall, which aims to attract local and international customers. It will presumably extend Ikea’s mission to encourage customers to exchange fussy, “chinzy” furnishings for streamlined Swedish-designed pieces.

Ahmed Ali Al Sayegh, chairman of Aldar Properties, which is developing Yas Island, said: “The presence of this major international retail brand fits perfectly with our vision for Yas Island as an unrivalled shopping and entertainment destination.”

Yas Island’s centrepiece is the Marina Circuit, which will host major motorsport events. It is due to open in November, in time to host the Formula 1 Etihad Abu Dhabi Grand Prix.

The island also features seven hotels, a “super-yacht marina” with capacity for over 140 yachts, a golf course and a theme park called Ferrari World Abu Dhabi.

Aldar Properties’ profit fell 80% in the second quarter of this year compared to the same period last year. The developer made a net profit of 1.14bn dirhams during the first half of 2009, against 2.6bn dirhams a year earlier. Aldar’s developments under construction increased by 44.8% to 33bn dirhams worth during the six month period. Although it has insisted Yas Island is on track, it has admitted it is reviewing other projects, including its flagship £13bn Al Raha Beach scheme.