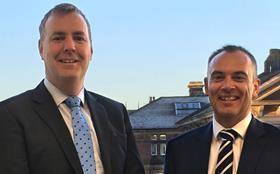 Carillion, which this morning collapsed into liquidation, has lost two of its senior staff to consultant Gleeds.

The contractor’s former integrated place programme director Michael Phillips (left) and head of financial structuring Lee Summersgill (right) have joined the consultant as part of the ongoing expansion of its public sector team in Yorkshire.

Phillips joins the business as a director of project management, while Summersgill is a director within the firm’s advisory division, based in Gleeds’ Leeds office.

Both will be working on public sector framework provider Scape Group’s £350m consultancy framework, which Gleeds, in partnership with Pick Everard and Aecom, won in 2016.

Prior to joining Carillion at the beginning of 2016, Phillips was a project director at consultant Capita Symonds and worked on the procurement of two new police headquarters and a training facility in West Yorkshire, as well as the delivery of over 250 extra care apartments and associated community facilities split over three sites in Hull.

Summersgill was previously an associate director at Gleeds before joining Carillion in autumn 2015. He had also worked for KPMG as an executive advisor for three years and Leeds city council for five years.

Richard Steer, chairman of Gleeds, said: “They [Phillips and Summersgill] have vast experience of the construction industry and a solid client base, developed over the course of their successful careers to date.

“Each of them benefits from a unique skill set which we believe will serve to strengthen our presence in the public sector across the region.”

On Friday, Carillion’s shares plunged a third after reports said it had lined up accountancy firm EY as an administrator if crunch talks about a rescue plan collapse.