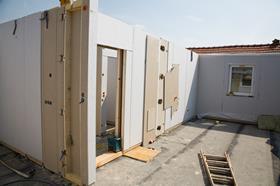 Goldman Sachs is ploughing £75m into a firm which makes modular homes for the UK market.

The US investment bank, which is due to move into a new headquarters Multiplex has built on Farringdon Street in the City, is sinking the money into Top Hat, which has a factory in Derbyshire.

Top Hat is building 300 homes at a development in Chatham, Kent, called Kitchener’s Barracks, which was originally built in the 1750s.

Estimates suggest less than 10% of the near-196,000 homes built last year were constructed offsite.

Homes England’s chief investment officer Gordon More welcomed the move and added: “It’s vital others join us in our mission.”

Top Hat was set up 2016 by US businessman Jordan Rosenhaus.