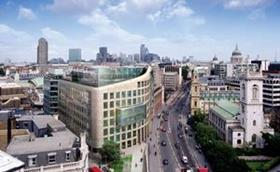 Investment bank Goldman Sachs has submitted plans for a 1.2m sq ft headquarters building in the City of London.

The nine-floor KPF-designed scheme near Holborn Viaduct will replace the existing buildings on the site – the 1960s concrete Fleet Building and Plumtree Court.

Planning consultant DB9 submitted an application on behalf of Goldman Sachs to the City of London Corporation on Christmas Eve.

The development site is on the corner of Shoe Lane and Farringdon Street.

As Building reported last July, consultant EC Harris and engineer WSP have been appointed to work on plans the project.