Michael Gove has turned down plans for a 1,000-home redevelopment of Brighton Marina after concluding its “homogenous” design was not good enough for such a landmark site.

The housing secretary agreed with the planning inspector that the Outer Harbour scheme, designed by Squire & Partners for the Brighton Marina Company, should be thrown out, arguing it “lacks the exuberance and ambition that the best of Brighton’s seaside buildings exhibit”. 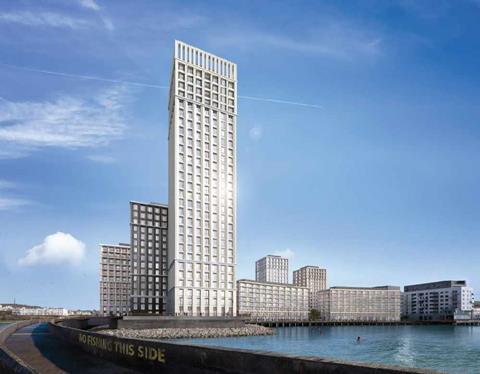 The scheme’s tallest building would have been 28 storeys

Phase two would have seen 480 flats built across three buildings between nine and 28 storeys high while phase three would have included 520 flats in six buildings ranging from eight to 19 storeys high.

Gove said the poor design would also impact on local grade I-listed buildings, while the homes themselves would not provide sufficient outside space for residents.

He said these failures put it in conflict with policies in Brighton’s emerging plan and with national planning policy and carried “significant weight” against the scheme.

Gove’s decision comes despite the site having an existing permission for 835 homes and being allocated in the local plan.

Brighton & Hove council also originally refused the scheme despite the council not being able to demonstrate the required five-year supply of housing sites.

It is the second major housing scheme Gove has thrown out since taking up the housing secretary role in September, following his decision to refuse plans for 1,250 homes in Rainham, Kent, earlier this month.

Both decisions have been in line with the recommendations made by the planning inspector.

Last week, Gove also turned down plans to build the Tulip tower in the City of London – again following the advice of the planning inspector.