Government refuses place at the table on parliament restoration board 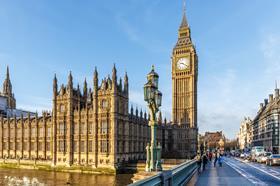 The government has decided against appointing a minister to the board overseeing restoration works at parliament as it insists the treasury will be consulted on the cost annually.

It has also declined to mandate the refurbishment of educational facilities, and creation of new outreach space – as it said they may not be “value for money”.

A report published in March by the joint committee scrutinising the bill for the restoration of the palace of Westminster said the treasury should be subordinate to parliament in setting costs for the scheme.

It said a draft term of agreement could establish what will be delivered for taxpayer’s money, and recommended a treasury minister sits on the sponsor board – the client on behalf of parliament – to ensure government buy-in for the scheme.

The committee said the move would “underpin the hierarchy of decision making” and “provide clarity to those delivering the project.”

But in a response written by the leaders of the House of Commons and House of Lords – respectively, Andrea Leadsom and Baroness Evans of Bowes Park – the government has refused to put a minister on the sponsor board or to alter the bill to allow the treasury to take a take a more back-seat role.

It said value for money was a “guiding principle in establishing governance arrangements” and pointed out parliament will still have a say over “significant changes” to design, cost or timing.

And it insisted on “a fundamental role for HM Treasury in being consulted on the annual estimates for the funding of the programme”.

Caroline Spelman, Labour MP and chair of the joint committee, said: “It is disappointing that some important recommendations we made have been rejected, for example […] having a treasury minister on the board would have ensured those responsible for taxpayers’ money would have a handle on the costs of the project.”

The government, which mentioned “cost” and “value for money” 13 times each in its 29-page response, also refused to compel the sponsor board to ensure education and other facilities were refurbished as part of the works.

It agreed with the joint committee that educational facilities were “important,” but said: “This must be balanced against the need for the restoration and renewal programme to deliver good value for money.”