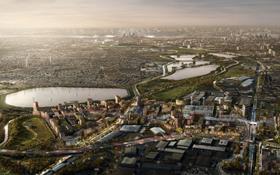 The government is to invest £600m of what it said was new money into building new homes across England.

Chancellor Sajid Javid said the funding would be available through the Housing Infrastructure Fund (HIF) and help pay for new transport links and schools across five housing schemes.

Javid, who established the HIF when he was communities secretary, said he wanted to see more people realise the dream of homeownership.

“But we need the roads, rail links, and schools to support the families living in those homes, which is why I set up a fund to put in place the infrastructure to unlock new homes in these areas.”

The five schemes due to benefit from the latest new government cash are expected to produce almost 50,000 homes.

Speaking about the £156m allocated for Meridian Water (pictured) in north London, Enfield council’s leader Nesil Caliskan said the success of the local authority’s bid reflected “the fact that the government recognises the huge potential” of the scheme.

“The HIF bid is great example of a proactive council working in partnership with public sector stakeholders including the Mayor of London and the GLA to deliver such a massive scheme and securing the infrastructure money that unlocks it’s potential,” she added.

Last month the borough called on prime minister Boris Johnson to back its housing plans with more taxpayer money.

Caliskan said Enfield, which took back control of the scheme in July last year, had already spent £250m out of its own resources “to drive this project forward”.

She added: “This funding will allow us to forge ahead with providing improved infrastructure, including a more frequent train service, which is needed to support this incredible development and deliver real benefits to our residents for years to come.”