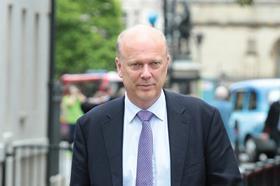 The collapsed contractor landed two slots on the project with joint venture partners French firm, Eiffage, and Kier, worth £1.4bn.

Shadow transport secretary Andy McDonald asked Grayling if he now accepted “that he got it spectacularly wrong and that his judgement and that his confidence were disastrously misplaced”.

But Grayling (pictured) told MPs: “I don’t accept that at all. At the time, I reviewed those carrying out the contracting very carefully, and I have carried out due diligence since.

“The HS2 project will not be affected by this, even to the point, I am pleased to say, that the apprentices working with Carillion on the project are being transferred to one of the other two partners. The work will continue uninterrupted. There is no delay and there are no cost implications..

“The contracting with Carillion was actually not with Carillion, but with a consortium of companies that are equally responsible for delivering the contract and will do so.”

Earlier this week, bosses at the HS2 railway said they are not expecting the joint venture team to go out and find a replacement builder.

A source said: “The whole point of joint ventures is they give you extra robustness. It’s why we encourage them in the first place.”

He added that HS2 is confident Kier and Eiffage will be able to carry out the work between them and said it would need to approve the appointment of a contractor lined up to replace for Carillion.

Construction work on the two deals to dig tunnels through the Chilterns on the line between London and Birmingham is expected to start next year.