Development by Grainger and Helical Bar approved by council 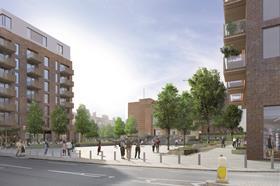 Hammersmith and Fulham council has approved revised plans for a £150m regeneration scheme in Kings Street from developers Grainger and Helical Bar.

The Lifschutz Davidson Sandilands-designed scheme, which was approved at planning committee on Tuesday night, will provide 196 new homes, a three-screen Curzon cinema, new council offices and retail and restaurant space. The consortium of Grainger and Helical Bar, called King Street Developments, will also pay the council £5.25m to a “regeneration fund” to refurbish the existing town hall.

An earlier scheme for the site by architect Sheppard Robson was ditched after concerted opposition by local residents, and following the decision of London mayor Boris Johnson to call the scheme in.

Following that, the council decided to change its development brief for the site, which will be built on former council land, reducing the height of the proposed towers.

Cllr Nicholas Botterill, Hammersmith and Fulham council leader, said he had listened to residents over the scheme. “It’s been hard work but we finally have a plan that will kick start the much needed regeneration of the west end of King Street. The developers can now get on with the important work of breathing new life into this rather rundown area.”

David Walters, development director at Grainger plc said: “We are delighted with the decision of the planning committee.  This is a fantastic opportunity to deliver nearly 200 new high quality homes in the setting of the handsome listed town hall.”

The scheme will now go forward for approval by the Mayor of London.