Scheme will include a hotel, offices and retail space 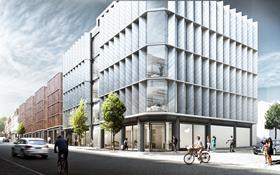 A £35m mixed-use scheme, including a 180-bed hotel, in London’s Farringdon district has been given planning permission.

The scheme, which is being masterminded by leisure group Whitbread and developer Endurance Land, will see the Bowling Green Lane car park on Farringdon Road turned into a Premier Inn hotel, office space, as well as retail and restaurants.

Owen Ellender, development manager at Whitbread, said: “The redevelopment will make best use of this important site by providing high-quality business, hotel and retail space in very close proximity to the station in a landmark new building.”

It will include 3,600sq m of office space and three retail or restaurant units fronting Farringdon Road and covering 400sq m.

It had to be redrawn by project architect Sheppard Robson when Islington council threw out proposals 18 months ago after it raised concerns about the size of the building and its impact on neighbouring properties. Endurance Land said the revised scheme had been designed “in a contemporary way to ensure that the building blends into the urban context of Farringdon Road”.

It will be built opposite a £40m office scheme designed by AHMM at the former Guardian building on Farringdon Road. McLaren is already on site with the scheme called The Ray.