The City of London’s eastern cluster of skyscrapers is set to gain a new addition after AHMM was given the green light for a 24-storey office tower.

The 117m tall scheme, which is being built for developer Brockton Everlast, will be located at 115-123 Houndsditch close to the Gherkin and the Cheesegrater.

It would have been in the shadow of Foster & Partners’ 305m Tulip building before that controversial project was killed off by communities secretary Michael Gove last week. 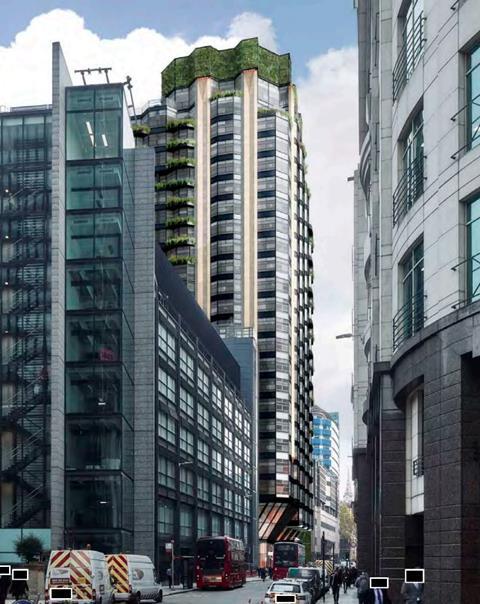 AHMM’s building will contain 85sq m of retail space on its ground level and 56,500sq m of office space on its upper floors, along with four basement levels.

It will also boast “expansive” green walls and trees planted both at ground level and on a series of roof terraces which step down from a top level ‘sky pavilion’.

AHMM co-founder and current RIBA president Simon Allford said: “Long-term sustainability sits at the heart of the ambition for this intelligent and lean design and we have set the highest embodied and operational carbon targets.

“Our plans will deliver a building that meets the highest standards of BREEAM, LEED and WELL.”

AHMM said the “low quality” buildings are “not of any recognisable style” and suffer from “ungenerous spatial qualities” which had not been “conceived to consider any future flexibility and current working practices”.

Demolition is becoming an increasingly controversial construction practice because of the greater carbon emissions which are often generated in newbuilds as opposed to refurbishments.