Ryder Architecture has designed the building in the north east city 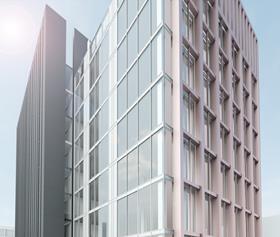 The building has been designed by Ryder Architecture and will accommodate 1,200 people in the science, technology and knowledge sectors in the north east city at the Science Central business district.

The build contract will be tendered early next year, with work expected to start on site in September and finish in May 2020.

This is the second office building that Legal & General has achieved planning for at Newcastle Science Central following The Core – a 27,000m2 space for start-ups and SMEs.

The urban regeneration project is set to create over 4,000 jobs, 500,000m2 of office and research space, and 450 homes. The aim of the development is to become a major UK hub for scientific research and technology businesses.

Ben Rodgers, senior development manager at Legal & General, said: “Through the regeneration of Newcastle Science Central, we will be able to deliver an ambitious vision for this landmark site that will see new uses of Newcastle city centre space, including state of the art office and research accommodation, new homes, hotel and public realm, and will bring thousands of new jobs to the area.”