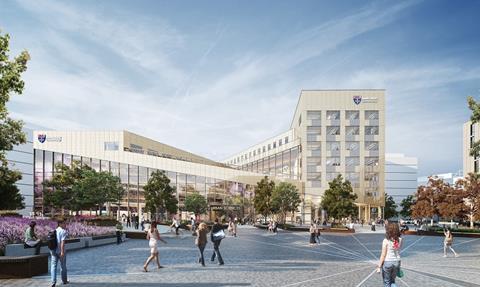 Designed by Hawkins\Brown, the 12,500sqm building (picutred) at Newcastle University will be the flagship development on the 24-acre Science Central site, the former home of Scottish & Newcastle Brewery in the city centre.

It will house the university’s school of computer science and will be used by around 1,500 staff and students.

The building will also be used as a research centre for urban sustainability and will provide an urban observatory and decision theatre, which will allow real time data to be analysed and explored to improve academics’ understanding of interaction between Newcastle’s energy, water, transport, waste and digital control systems.

Meanwhile the biomedical engineering research hub at Imperial, partly funded by a £40m donation from Michael Uren OBE and his foundation, was designed by Allies and Morrison.

It will house research laboratories, an outpatient clinic, a 150-seat auditorium, and several social spaces designed to encourage exchanges of ideas.

The hub will be part of the regeneration of the university’s White City campus, which has plans for publicly accessible green space, student accommodation, local retail facilities, and a pedestrian cycle route, and is expected to create several thousand jobs.