Planning has been approved for AFC Wimbledon’s new stadium development 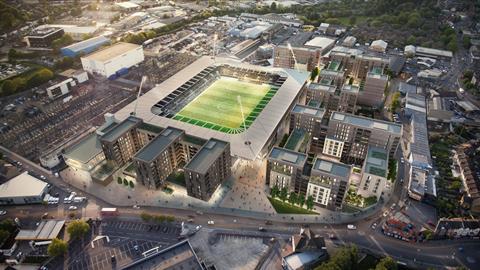 AFC Wimbledon Football Club and Galliard Homes have won planning approval for a new stadium and 600 homes on Plough Lane.

The masterplan for the 14 acre brownfield site has been designed by Sheppard Robson, who has also designed the residential, retail and leisure elements of the scheme.

Around the new stadium Galliard Homes will build 602 apartments across three buildings ranging from six to ten storeys.

Demolition of the existing stock car and racing track buildings on the site will begin on site in the second quarter of 2016 followed by a three year construction programme.

Erik Samuelson, chief executive of AFC Wimbledon said: “We are all absolutely delighted, this has been a momentous day for our club. This is our home and we are delighted that we have been granted planning approval to return to Wimbledon.”

Mike Watson, planning & development director at Galliard Homes said: “We are delighted to have received planning permission to redevelop this important brownfield site into a new multi-million sports led destination for Wimbledon.”

“The new homes will include affordable housing for local people and will make a significant contribution towards Merton’s own minimum 10 year target for new homes and the regeneration of this part of Merton.”