Green schools policy in limbo as launch date draws near 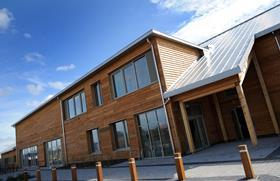 The requirement for schools to achieve BREEAM sustainability ratings is still under review just weeks before the government’s major school building programme is due to be launched.

Draft design guidance produced by the government’s schools delivery body the Education Funding Agency (EFA), seen by Building, includes a clause stating that design teams should “report the environmental impact of the project using BREEAM 2011 for schools, or equivalent, with a rating of very good”.

However, this clause is followed by a note stating that this is still “under review”.

This is despite the fact that last week schools minister Nick Gibb told parliament that the “outcome of applications” for the long-awaited £2bn Priority Schools Building Programme (PSBP) - which is three times oversubscribed - would be announced this month after a six-month delay.

Gibb is expected to announce around 30 schools will be taken forward in the first wave of the programme, which was set up in place of the previous government’s £55bn Building Schools for the Future programme, scrapped by ministers in 2010. Procurement, initially expected in April, is now set to get underway in September.

Education secretary Michael Gove put the BREEAM requirement under review following the James Review of schools capital, which singled out the BREEAM regulations for criticism, citing the excessive burden of regulation and guidance in procurement and high costs for carrying out pre-assessment of BREEAM for schools.

Concern over the green schools policy were heightened last month after Building published the results of a comprehensive post-occupancy evaluation of schools built under the previous government, which found that a third of schools were judged to be “unsatisfactory” in terms of their sustainability, while the vast majority had failed to meet the required energy efficiency standards.

Speaking at the BFE conference in London today Peter Lauener, EFA chief executive, said many schools built under the previous government “used more energy than they should have done”. “We have to ensure new schools don’t make the same mistakes,” he said.

The draft design guidance, dated April 2012, also lays out a standardised approach for schools, saying that under the PSBP schools will be procured in groups and sample designs should be able to be used as a basis for all schools in a group.

However, as reported by Building last month, it stops short of endorsing a particular standardised design, with the government now favouring an approach that sets out basic recommendations on the specifics of school design and stops short of setting rigid specifications for school building.

At the BFE conference, Lauener said: “I’m concerned standardisation means different things to different people. I don’t want educational buildings to experience groundhog day. But we need to realise what is ‘need to have’ and what is ‘nice to have’.