Architect RMJM had previously drawn up the masterplan for the scheme 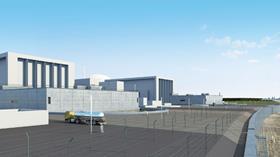 Architects Grimshaw and Canaway Fleming have been appointed to draw up the plans for EDF’s new nuclear plant at Sizewell in Suffolk.

The plant will be the second of the electricity firm’s new fleet to be built after work starts on its new nuclear power plant at Hinkley Point in Somerset.

The architects will support EDF in the development of the Suffolk scheme, which is due to be consulted on later this year.

Architect RMJM had previously drawn up the masterplan for the scheme but earlier this year EDF started a competition for the contract to do the full design of the power station.

A spokesperson for Grimshaw said: “Sizewell C is of national importance, helping to achieve the UK’s commitment to tackling climate change, while also ensuring the country’s long term energy security. We believe that infrastructure of this importance should be designed to the highest quality.”