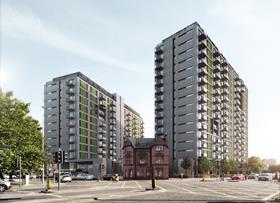 Increasing workloads in Manchester and across the Pennines in Leeds has seen consultant Naismiths poach a handful of staff from Currie & Brown.

The London-based firm has moved for former Currie & Brown associate director Chris Wilman who now becomes a director at Naismith, where he will head up the surveying team in Manchester.

Prior to his 13 months at Currie & Brown, which is owned by Lebanese firm Dar, Wilman spent over six years at JLL’s Manchester office.

Naismiths has also added a senior surveyor, Steven McKay from Cushman & Wakefield, to its Leeds office.

Gareth Belsham, national head of building surveying at the £5m turnover consultancy, said: “The northern market has emerged as a real hotspot. Together [the new arrivals] will ramp up our capability across the Northern Powerhouse.”

The 70-strong business has six offices in the UK with current projects in northern England including a mixed-use scheme (pictured), which includes 380 apartments across two blocks, being built in Salford.

It has been designed by 5plus Architects and is being masterminded by the development firm of the founder of online bookie BetFred, Fred Done.